Greetings! I'm pleased to announce another of my Breathless Press titles is being re-released. The book will be available in electronic and paper formats on April 13th at the following vendors: 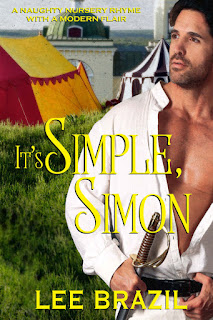 Simon Carter has achieved unimaginable success and he owes it all to a man from his past whose scorn set fire to his ambition.

"It's Simple, Simon. You lack ambition."

Chase Garvin's jibe had sent Simon Carter on unexpected paths and brought him unimaginable success. No longer a penniless musician, the highly paid investment banker is going home for the first time in years. He plans to rest, relax, and spend a little time rubbing his ex-lover's nose in his success. A visit to the Renaissance Fair brings this not-quite-so-simple- Simon nose to nose with his past and somehow revenge doesn't seem quite so attractive.
Chase Garvin, Denver, Colorado's very own Pie Man, is still incredibly handsome. What's more, the more mature Chase is very appreciative of Simon's talents.
When the old attraction flares between them, Simon and the Pie Man get caught up in tasting the wares, and neither counts the pennies.

EXCERPT
He sniffed the golden pies. Mmm. Chase had always been talented in the kitchen. The aroma was intoxicating. Delicious. As he ate, savoring the flaky crust and rich fillings, he contemplated the man who'd treated him to the pies. Chase was one hot baker. He'd always been sexy, but there was no way that hunk of beef could fit into his old Renaissance garb. Chase had put on muscle. His shoulders had broadened, his biceps bulged, and mmm.... The rest was hidden behind that voluminous apron, but Simon doubted that it had changed much.
Best of all, Chase still seemed to find him attractive. That was just icing on the cake. The sugar on the pie? He chuckled softly. Whatever it was, he liked it. Liked the idea that Chase might still be interested in him sexually. As he licked the sugary filling off his fingers, he contemplated abandoning his plan. After all, Chase hadn't meant to hurt him years ago, and he'd certainly seemed welcoming enough, even though to all appearances Simon hadn't changed over the years. Yeah, there really wasn't any reason to prove to Chase how successful and ambitious he really was. He should just come clean.
On the other hand, he felt like enough of an idiot for hiding his success in the first place. He bit into the next pie, feeling the juice trickle down his chin. He licked at it, chewing and swallowing, scrabbling absently for a napkin to wipe his chin. It would be horribly embarrassing to go back to that booth and offer to pay for the pies, to tell Chase why he hadn't wanted to pay in the first place.
"Here, I'll get that for you." Chase grabbed his napkin. To his surprise, Chase drooped down onto the grass next to him. Instead of dabbing his chin with the white paper napkin, the man leaned forward, his breath a warm buttery scented breeze as he hovered close for a moment before gently licking the juice off Simon's skin.

Posted by Lee Brazil at 4:30 AM No comments: