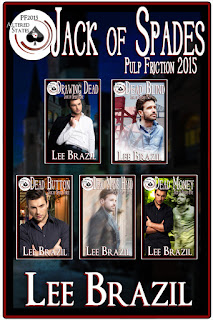 The world hasn't been the same since the preternaturals came out of the closet. Much to many people’s chagrin, strange beings of all kinds are making life tricky for the "normals."
Physics professor Dr. Sabine Brusilov has been obsessed with ghost hunting since he was eight years old.. He's gathered a wealth of knowledge, but can't produce a shred of scientific proof.
One hundred and seventy-five years of death haven't done riverboat gambler Barton Montoire a damn bit of good. He's still rash, impulsive, and prone to fits of temper and bouts of melancholy.
You'd think that when fate brought the two of them together, Bart's lonely spirit would be calmed, and Sabine would have the proof his heart desires.
In a world where mythical beings are real, love is still the most elusive… and treacherous myth of them all.

Posted by Lee Brazil at 3:30 AM No comments: