Crawling Into Bed With
A Kitty, A Bear, and a Good Book

* crawls across the bed*  *pauses*  Hmmmm....This poses quite a dilemma.  Do I curl up with the bear or the kitty? In the middle? On the left or the right? Havan? What do you think?

*nods* You're absolutely right. *grabs a pillow and tosses it to the foot of the bed* The view is awesome from down here.  *snuggles up and puts my head in Havan's lap*  Important things first, are these sheets silk or cotton?

(Tom) Good think we got the California King then huh?  And Egyptian cotton totally absorbs everything.

(Princess) Move over Tom. *crawls in next to her brother and Tom* He forgets Talon is a package deal sometimes.

(Talon) This here is my twin sister Princess, *hugs her*

(Havan)*Hello...this is the most gorgeous filled bed I've ever seen!

Of course I brought Havan...Hey now, Havan! That doesn't mean stop petting me!

Hello, Princess. So pleased to meet you. This is really cozy...who's...um...Hey! That's my foot!  *gulps* So...interview... questions... what was I supposed to...Havan! *psst- whispers* These two are so sexy...the visuals are distracting me. What's the next question?  Oh, yeah... Right.

OW!  Was that really necessary? Yes, dear. *rubs head* What are you wearing?

(Talon) Stop it *smacks Tom’s hand away* I was wearing these really cool and uber comfy bright neon yellow-n-white boxer briefs by ‘Get me off” but dammit Tom keeps yanking them down around my thighs. Go pull on Lee’s shorts awhile… WAIT scratch that, *scowls*

(Tom) I think Lee and Havan would be happy to be nice to me.  Although you do look really good in that color. Come sit in my lap and I promise no more yanking. On the underwear. For now.

(Princess)  *Rolls her eyes* they’re always going at each other

*eyes widen* This is so much better than that interview where Talon made me watch porn....Ouch! Quit pulling my hair!

(Havan)*Oops...sorry honey...totally on accident *giggles and twirls Lee's hair in my fingers again*

(Talon) I don’t know but I don’t think that what I had was nearly as good at what you and Havan are eating right now… No Tom, I don’t count as a snack…

(Tom) I happen to know what my kitty likes. And don’t be vulgar, I am a gentleman. Red grapes. Pu Pu platter from that little Chinese place down the street. And Mountain Dew for my boy.

*aside to Havan* Were we eating?

(Havan)*shrugs and eyes our guests* I can't remember what I had an appetite for before...um...

I think I forgot to chew.  They're so pretty together. If I open this nightstand drawer, what will I find?

(Talon) *slaps hand over my eyes* I can’t look… *slaps other hand over Havan’s eyes* she’s not allowed to look.

(Tom)  Oh please! *opens drawer* An e-reader. Pens and pencils and paper. A dreamcatcher. And a little teddy bear to keep him company when I’m not here.

(Talon) *peeks then scowls* You hid the paddle again?

(Tom) *slow evil grin* Oh, you'll be seeing it soon enough...
I think the dogs are due a new chew toy

(Princess) See what I mean?

(Havan) So am I really the only one who has golf balls in my nightstand drawer? Huh...go figure...

*eye roll* Please. Have you seen Havan's bag? There's no way you could fit anything in that drawer she hasn't already seen, bought in three colors, and used ingeniously.

Why is there no tequila in there? I could really use a nice icy shot of tequila right now. Do you roll up in the blankets like a burrito, or kick the covers off during the night?

(Talon) I just kick my feet out... but have you ever slept with a Bear? There is no kicking them off… I said kicking not getting... down Bear!

(Tom) He’s a cover hog. But he generates heat like nobody’s business, so we manage.
(Talon) *grin*

(Princess) It never ends between these too and I have to live with this.

*snickers* Nice...Can I put my cold feet on your calves to warm them up?

Are you insane? No freaking way will you get away with that.

(Talon) Who’s gonna warm up my feet? Is Havan any good at foot rubs?

(Tom) *Growls* Talon. That’s one. Keep it up and you won’t be sitting down tomorrow.

Havan is very good at everything she does...too bad for you.

(Havan)*awwww...love my muse! *kisses* Talon...don't make me pull out the catnip...my muse has never complained about me...

(Talon)  Talon and the three bears… once upon a …

(Tom) Three bears? Does that mean I get three kitties? We will definitely need a bigger bed now.

(Havan)*holds my muse and hums happily* 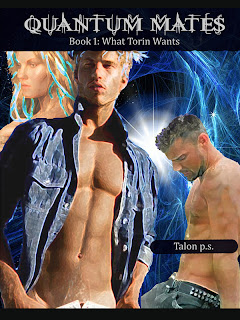 Quantum Mates: What Torin Wants
http://www.amazon.com/dp/B007KM9Q9W
A new life on the Quantum Transport Research Project is what Raffe Landau is hoping for, what he found was a lover with a rare and similar condition of mutation that makes everyone else untouchable. But there’s a reason the space station has laws that forbid anyone touching either of the TorinLee twins and when they’re attacked, Raffe knows he’s to blame. But the only way to protect the young man he’s fallen in love with is to stop touching him.
Torin has ever known human touch. That is until Raffe came along and it’s not just the touch. Raffe makes him feel things he never knew existed. So when Raffe pulls away, not only does he not understand, it’s not allowed. Raffe’s about to find out that what Torin wants Torin gets.

Email ThisBlogThis!Share to TwitterShare to FacebookShare to Pinterest
Labels: Crawl in Bed, interview

Making Up
by Lee Brazil

Chris's scorn raked over old wounds. Good let him be angry.  Stan was sick of pretending to be friends with his ex. He'd engineered this meeting to resolve that issue.

"It's not my opinion of myself that bothers you." Stan scowled at his critic. "It's my opinion of you that riles you. Anyone would think it was your money we're talking about. You're a tightfisted miser, Chris." Money had been at the root of all their fights back then, too.

"Your boundless ego ceased to be amusing three bounced checks and an over the limit gold card ago." Chris scribbled something on a note pad.

"I don't know what you're talking about." Stan shifted forward to hide the way his dick responded to Chris's display of emotion. Too many memories of angry make up sex that melted into tender apologies battered at him. "Don't I pay you to take care of all that shit?"

"One of the bounced checks was written to me."

"So you don't work for me now?" Stan darted from his chair and dropped into Chris's lap.

"Then there's no reason I can't do this, is there?"