Take A Look at the Back List: Donovan's Deal

Look! A Writing Challenge!  This is revised from a challenge that was circulating in 2012.
The Rules are simple:

Find the word LOOK in one of your back list books, and then post the three paragraphs surrounding it. Post your favorite three, the ones that are most intriguing and then tag three other authors who might like to share their back-list. I'm tagging Em Woods, Sara York, and Silvia Violet.

This excerpt is from Donovan's Deal Truth or Dare #6


Interesting. "Forgot my wallet. What do you mean you can't afford to support me? I have a very decent salary for the work I do as Dan's assistant, and Donovan and I are doing just fine at supporting ourselves." Of course, they'd do much better at it if Donovan would just use some of the god damn money from the trust for things like Matt's school and soccer fees, house payments and vehicles. No. Not his antiquated fossil. Donovan had strong ideas about his role as the man of the family, about providing for his loved ones. Mischa pulled a wad of hundred dollar bills from the leather wallet and tossed them on the table in front of him. He cast an inquiring glance at Terry to see if he planned to answer the question.
Terry grabbed the wallet back muttering dire insults under his breath. "You're paying that back. And quit looking at me. I'm not in financial difficulties."
Mischa smirked and clicked his piercing loudly. "You'll end up owing it to me in a few hours anyway!" But he noted the lie in Terry's eyes, and made a note to sound out Dex and Trick about what was going on his brother's house.
Posted by Lee Brazil at 4:00 AM No comments:

Crawling Into Bed With
And a Good Book
Important things first, are these sheets silk or cotton?
Cotton sheets today, dear. I've brought someone along who just wouldn't be able to handle the fuss of silk. Lee, this is former Marine Sergeant Zachary Morrison, who currently acts as the head of sidhe Prince Lugh's security. Zack, dear, you don't mind if we use you for the middle of the sandwich, do you?
Zack shrugs. "Lived with fae for too long now, Ms. Angel. They're a cozy bunch, let me tell you. Never quite sure who'll end up on your lap. So long as Mr. Brazil doesn't mind."
What are you wearing?
Me? I'm in the new snowflake jammies I got for Christmas. Zack, I'm sorry, you can't wear your boots and jeans to bed.
"Sorry." Zack strips down to a pair of deep blue boxer briefs, revealing a beautifully sculpted body with some vivid scars on his chest and legs. "This all right?"
Get in the bed, handsome. Keep us warm.
What are we snacking on in bed while we read tonight?
"Ms. Angel asked me to bring something." Zack leans down to the foot of the bed and hands out bowls with steam rising from them. "I'm no gourmet but I can find my way around the kitchen. This is my chili recipe. You have to start with the chili powder and the onions and garlic cooking by themselves and you have to use black beans. Nothing else works the same. Takes a few hours but it's worth it."
He leans in close to hand Lee a napkin wrapped bundle, whispering in his ear, "And corn bread. It's not chili night without corn bread."
If I open this nightstand drawer, what will I find?
"Careful! My gun's in there. Some old ticket stubs. Couple of keys leftover from something. Box of condoms. Dog tags. Lube." Zack rummages around and flushes scarlet. "Um...how did the handcuffs get in there?"
Do you roll up in the blankets like a burrito, or kick the covers off during the night?
"I get over heated easier these days. Something about lycanthropy and increased metabolism, at least that's what I hear. I don't stay under the covers long these days."
Can I put my cold feet on your calves to warm them up?
Zack laughs and pats Lee's leg. "Of course you can. I'm always finding some fae cutie snuggling up to me to get warm in the evenings. Gotten to the point where I feel like an extra piece of furniture when we all watch TV together at night."
What are we reading? (include your cover art, buy links & excerpt)
"I'll let Ms. Angel handle this one. I guess she felt like she had to tell the story but I can't say I'm real comfy with parts of it."
Man up, Morrison. People want the good and the bad. Zack's story just released in:
Semper Fae: Endangered Fae 3

Recipe Theme of the Month: Nostalgia
Hey there! I've been thinking a lot about recipes my mom used to make, that I loved as a kid but never seem to serve as an adult. This is a really simple dish that tastes like ti took hours to prepare. It's spicy and filling.

Curried Rice With Raisins and Almonds
. Ingredients:
3 tablespoons butter
¼ cup of diced onion
¼ cup of diced carrots
1 cup uncooked long-grain rice (We use Jasmine or Basmati)
2 cups chicken broth or beef broth (Or Vegetable broth, even)
1/4 cup raisins
¼ cup of slivered almonds
1 teaspoon curry powder
Preparation:
Melt butter in a heavy medium saucepan over medium heat. Add onion and carrots. Cook for about 5 minutes, until soft. Add rice and stir to coat well with the butter. Add broth, raisins, almonds and curry powder. Stir to combine ingredients. Cover and bring to a boil. Reduce heat; simmer for 20 minutes, or until rice is tender and liquid has been absorbed.

Once again, this is a dish that can be personalized. I like to add chopped dried apricots, or cherries instead of raisins sometimes. Substitute celery for the carrots, or even peas. You can heat up with red pepper flakes, even. Throw in some chickpeas or chicken, and it’s a main dish.

Thanks for stopping by!
Lee
Posted by Lee Brazil at 4:00 AM No comments: 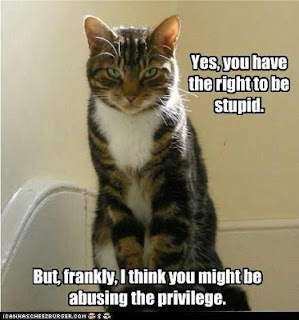 Mine does. I don't know what she expects from me, but I do know that she doesn't think she's getting it. I usually get this look right before she turns her back on me and pointedly stares elsewhere.

Sometimes, the look is accompanied by a tail swish.

That's when I know I'm in trouble.

She hasn't forgiven me for shutting her up in the back porch for a week while we had dogs visiting.  I explained to her that the visitors were much too large for the back porch, and that it was only temporary, and strictly for her own safety.

I have a very expensive array of gourmet cat food in tiny pouches and tins to mollify her injured feelings.

I hope to avoid any unpleasantness.

Hi everyone!
Come on in and sit a spell. *sips coffee* Ahhh. That's good stuff. I’m working my fingers to the bone this month... well, not really. I'm working at adding another book to my paperback collection: Going to skip over Taking the Dare for now until I can do the whole series...Breathless Press currently holds a paper rights contract on the first three books and I need to explore the options there. The next paperback release will be Mark's Opening Gambit, not sure exactly when as it needs to be re-edited, formatted and cover art designed. Definitely by the end of the month though.

I'm working on a series of regency romances with a friend, we're planning six titles, three M/M, which I'll write, and three mmf, which she will write. We're calling it Behind Closed Doors, The Brigstock Family. The first book, Randall's Romance is nearly complete and I'm really enjoying revisiting the regency setting. (I wrote Less Than All last year and it was my first venture into the realm of Regency England) This is all first draft work, so of course you won't be seeing it until maybe June.

Speaking of regencies, I am adding a new title to my Rake series this month. This one is called Tailored for You, and will feature Gavin's visit to his tailor. *fans face* As you know, these naughty little stories are just for fun pieces. Quick and sexy, Heated Exchanges can take place anywhere, any time, between any characters.

And Story Orgy is working on a new anthology, this one based on prompts provided by readers in the form of song titles form the 50's. I’m basing my story around the song Dream Lover by Bobby Derrin. It's turning out to be a very different sort of story, more than a little surreal. So far I've had call to draw on Mary Shelley's Frankenstein, the poetry of Robert Frost, Homer, and L. Frank Baum's Wizard of Oz. Should be fun. I'm enjoying writing it, anyway. Deadline is April first, and I need to add another 3K this month to bring it to the required 10K. Should definitely be doable.

Last but not least- I'll be outlining the third Chances Are story this month. I’m not going to tell you many details, because, well...the second story isn't out yet and I don't want to spoil it for you. Suffice it to say that it isn't following the outline I planned when I plotted out the five story romance ARC. *chuckles* That's okay. I have ideas for a bit of a fling for one of the other characters... But that will have to wait till later.

Thanks for stopping by!
Lee
Recent Releases
Chances Are book #1...

The Aristocrat & His Servant
Pulp Friction Heated Exchange: Leaving you satisfied for now
Posted by Lee Brazil at 4:00 AM 2 comments: