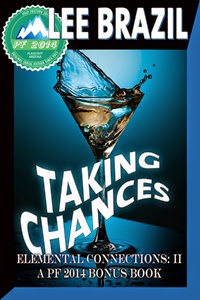 Taking Chances - rejoin Rory and Chance as they rush out to Arizona to check up on Cannon in this Pulp Friction Bonus Book, tying 2013 to 2014.

Available at All Romance Ebooks

When a phone call to check up on an old friend ends in an abrupt "What the f*ck", Chance DuMont and his young lover, Rory Gaines, drop everything and fly off to Arizona to the rescue.

They've been through too much in the past year, and when it comes to the men they consider family, Chance and Rory aren't taking chances.

Laura Harner ~ Lee Brazil ~ Havan Fellows ~ T.A. Webb
The Pulp Friction 2014 Collection. Four authors. Four Series. Twenty books. One fiery finale. Spend a year with an eclectic group of strangers brought together through circumstances, as they are tested by life, and emerge as more than friends.
The strongest bonds are forged by fire, cooled in air, smoothed by water, grounded in earth.
Although each series can stand alone, we believe reading the books in the order they are released will increase your enjoyment.

Round One:
Firestorm (Fighting Fire: 1)
Cold Snap (In From the Cold: 1)
Blown Away (Whispering Winds: 1)
Higher Ground (Earthquake: 1)

Round Four
Flare-up
Out In The Cold
Blown Chance
Aftershocks