Crawl in Bed With TN Tarrant

Posted by Lee Brazil at 4:30 AM No comments: 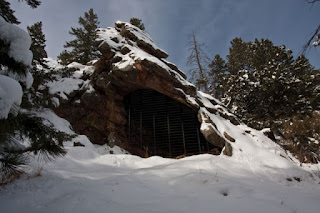 The village Elders warned of a creature that lurked in the forest depths. Elric was a skilled hunter, a warrior who defended his people. When game was scarce what choice did he have but to go further into the wood?
He'd followed a deer trail to this place. Grey water sparkled in the winter sunlight  A man, not a beast, sat on his haunches in the mouth of a cave, eyes as grey as the spring locked squarely on Elric.
"You have come."
He couldn't look away from those glittering eyes, his heart raced and his stomach knotted. "For me?" Elric dropped into a defensive crouch, hand landing on the haft of his bone tipped spear.
"You are the one. It was foretold."  The man retreated into the cave, motioning Elric to follow.
On the threshold he froze.  In the midst of the horror that furnished the cave, the old man sat, staring.
"What?" Elric's grip on his weapon tightened ready to defend himself, but it seemed the man's gaze held him immobile.
The man glanced around as though just noticing the grisly remains that littered his domain. "They were not you." He shrugged, "It was foretold. Fulfill the prophecy."

If you enjoyed my flash, check out the others at

Crawling Into Bed With Jason Fleetfoot, Drew Danvers, and a Good Book

Important things first, are these sheets silk or cotton?
Jason: Silk. I love how smooth they are. When Drew goes at me hard and starts shoving me across the bed, nothing chafes.
Drew: *shakes his head* TMI, Jason.

What are you wearing?
Drew: boxers
Jason: *peeks under the covers* What? Why? Since when do you wear anything to bed?

What are we snacking on in bed while we read tonight?
Jason: Ooh. I got us some wings. I was going to order some chilli cheese fries too, but Drew thought that was too much.
Drew: I'll be snacking on Jason. *grins showing off his fangs*

If I open this nightstand drawer, what will I find?
Jason: *grabs Lee's arm* Don't open that. Drew will get all embarrassed. Did you even know a vampire could blush?
Drew: *rolls eyes* Lube, toys, and a gag. You can see why I need one.

Can I put my cold feet on your calves to warm them up?
Jason: *smiles lasciviously* Definitely.
Drew: *flashes his fangs again* Don't touch him.

Protect and Serve: Hoofin' it to the Altar by Silvia Violet
https://www.changelingpress.com/product.php?&upt=book&ubid=1891

Blurb:
Deer shifter Jason Fleetfoot and vampire detective Drew Danvers have been together for a year. When Drew proposes, Jason is thrilled but shocked. Vampires aren't usually the marrying kind, even the few who side with the good guys. Drew wants to elope, but Jason's sister, Natalie, insists on planning an elaborate ceremony.

As Jason and Drew fend off well-meaning friends and family, a far more serious problem threatens their union. A vampire killer is on the loose. He subdues his undead victims without a struggle and finishes them off by literally curdling their blood. Drew has no idea what could kill a vampire so easily, and everyone suspects he's next on the killer's list. Can he stop the killer in time for "Dearly Beloved, we are gathered here today..." to start his wedding instead of his funeral?

I'm Jason Fleetfoot, deer shifter and crime lab tech. I might look like a badass, but lately, I'm embarrassingly domesticated. I'm living like an old married man with a vampire. That's right, a vampire. Me and my man have settled down into a predictable routine just like upstanding normal folks. A few months ago, I moved in with him and volunteered to keep working the night shift at the crime lab while he's out chasing down bad guys. He's a big, bad detective. Yeah, a vamp who works for the good guys. We come home from work, have dinner, well, I do. He has me for dinner. Then we watch a little TV and tuck in for the night or, rather, day.

What about the sex? Don't look shocked, I know you're interested. The sex is anything but predictable. Drew is hotter than a solar flare. We're both stronger and faster than humans and willing to try almost anything. I'll just say we've damn near brought the building down a few times and leave it at that.

I can barely believe we've been together for a whole year. Before I met Drew, if I fucked the same guy for a week, I started to get antsy, but now I'm in love. Yeah, I admit it. This badass stag shifter is all mushy-gushy, I-don't-ever-want-to-leave-you in love. And love makes you dumb. Dumb enough to think a vampire would care about celebrating our anniversary.

I made us reservations and kept them a secret until today. I surprised Drew with the plans when he woke up early this evening, and he seemed happy, if a little distracted. I thought he was into my idea even though we rarely go out unless we stop by Shift for a beer on our night off. Drew doesn't eat, but he likes to watch me when I order something special. I love to eat, and sometimes I really get into my food. Drew says I look like I'm about to come from the deliciousness, and he likes that, a lot.

So I got all dressed up, well, all dressed up for me, which means a collared shirt and a coat with my jeans, and planned to have a nice, civilized evening. But Drew went to do some errands after he got up, and now he's a half hour late meeting me at the restaurant, and he's not answering his phone.

Now, my anger turns to fear as I think how unlike him it is to be late. He just closed a case involving a werewolf pack that was kidnapping young women. Supposedly, the guilty parties were in jail, but what if they've found a way to get retribution? And they are far from the only people who'd like to see Drew permanently dead. Thanks to the news coverage of his kidnapping and forced Change at the hands of a vampire crime boss and the city's unlikely decision to let him keep his job with the police force, Drew is fairly well known. There are plenty of people out there, human and vampire, who don't like the idea of his kind fighting crime.

I grab my phone to call Drew again, but as I do, he walks through the door. He looks amazing. He's wearing gray dress pants and a pale blue shirt that strains against his broad shoulders. He even has on a tie, blood red, of course. He must have bought the outfit while he was out, because I've never seen any of those clothes in his closet. He smiles at the hostess, the smile that gets most female witnesses to tell him anything he needs to hear. It used to make me jealous when he looked at others like that, but now I just smile and think how lucky I am to have him all to myself.

He catches sight of me, and his smile widens. My heart pounds. Even after a year, I still get excited when he looks at me like that. I'm so relieved he's not decapitated in an alley somewhere that I can't stay angry about his tardiness. He's too damn charming in his suave clothes.

When the hostess walks away, Drew's hot gaze pins me in place. "I'm sorry I'm so late," he says.

"You didn't answer your phone." Shit! I sound like a nagging wife.

"First time you called I was paying for something. Then I rushed home to change. I thought it would be better to get here as fast as I could rather than wasting time calling you."

Logical, but annoying. "I was worried."

"Um, you're a detective, remember? You chase bad guys who'd be happy to see you dead, and you just put some savage pieces of shit in jail."

"What's wrong? Did something happen tonight?"

He shakes his head. "No, I'm just distracted."

"Did Seth call? Did you get a new case?" Seth is Drew's lieutenant and also a good friend.

Our server approaches the table. Drew looks relieved that I can't question him any more.We place our drink orders, and I try to engage Drew in conversation, but he's doing his cold, distant vamp routine, and it's pissing me off. "If you didn't want to go out, why the fuck didn't you say so?"

The server times his reappearance perfectly to save Drew again. I wonder if he heard me, but I'm too angry, and I don't care about making a spectacle. Why was Drew acting like he'd rather be anywhere else?

I order, and the server turns to Drew expectantly. Drew gives him a smile that shows fang. His eyes widen, and he steps back. "So that will be all then, gentlemen?" He nearly chokes on the last word.

"I don't want him hovering."

"You don't want him flirting."

Drew attracts men and women without trying, whether it's because he's a vampire or just his natural magnetism. He usually finds several admirers wherever we go, but he's more likely to scare them away than flirt back.

He smiles at me, and instead of looking disinterested like he did before, he looks turned on. What game is he playing?

Find out how Drew and Jason got together in Sex on the Hoof. Available at Changeling Press: http://changelingpress.com/product.php?&upt=book&ubid=1629
Amazon: http://www.amazon.com/Protect-Serve-Sex-Hoof-ebook/dp/B007BEVARU

Learn more about Silvia Violet at http://silviaviolet.com
Posted by Lee Brazil at 4:00 AM 2 comments: