Thanks to everyone who stopped by and commented,

Our blog hop winner is

Congratulations Lisa, and see you next time everyone!

Greetings everyone! Happy St. Patrick's Day to you!

Whether you're celebrating by wearing green or drinking green, I wish you all the best! 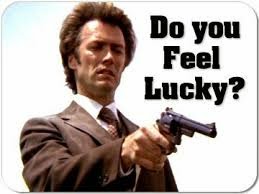 Because one Lucky person who comments on this blog post will win.

Okay, not a pot of gold, but for readers, the next best thing.

A $10 All Romance eBooks gift card.

So leave me your email ( prizes are awarded electronically via email!)

and the answer to this question:

Meanwhile, luck plays a role in many romances, I know it did in mine. I was very lucky over seventeen years ago, to pick up the phone in the book store where I worked at the time.

On the other end of the line was a voice that captured my attention.

He was an employee at another branch of the store, calling to check on a book for a customer.

How lucky could I get?

I fell in love with a voice on the phone, and luck brought us together.

Love has kept us together. 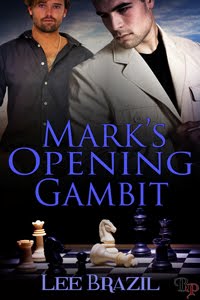 Since you're here, why not take a look at my m/m romance,

Where luck plays a part in bringing two men from opposite sides of the track together.

The son of a wealthy business man, Mark Addison is an expert at chess and hiding. Mason Grant labors with his hands in a menial position; he's open about who he is and what he wants in ways that terrify Mark. Their paths shouldn't have crossed, but now that they have...
They came from different backgrounds, yet each adheres to his own version of family duty and responsibility. One would make any sacrifice for his family's well being. For Mason Grant that means leaving school at sixteen and working hard while living as a man of integrity to set an example for his brothers. The other would sacrifice anything to keep his family life calm. If that means hiding who he really is from his high society, narrow-minded parents, then that's what Mark Addison will do. He just wants to run his shop, host a few tournaments, play a few games of chess.
When Mason meets fussy, precise chess tournament director Mark, he isn't expecting much more than a few hours of uncomfortable sleep in his car while his brother plays. One disdainful look from Mark changes that.

You can buy Mark's Opening Gambit at most ebook vendors

Thanks for stopping by, and if you're still feeling lucky, well then, click on over to the other Blogs in the Hop and see what they have to offer.

Awesome Review For Cold Snap from Melanie at Scattered Thoughts!

Now this is the kind of review an author loves to wake up to! 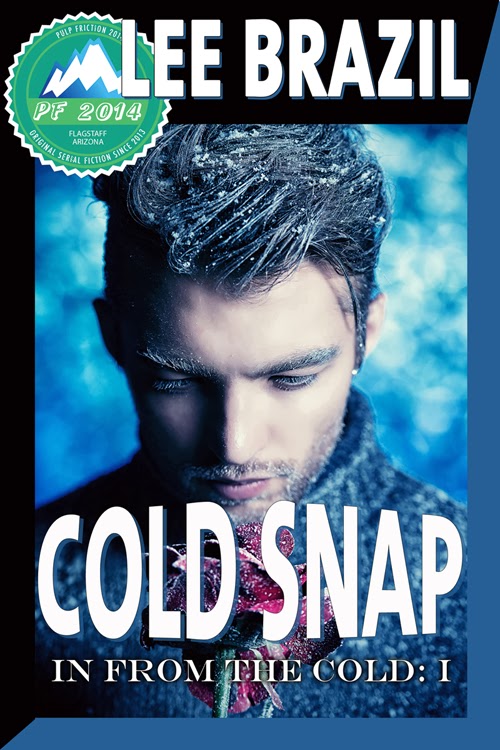 "the characters are so vivid and real that they threaten to burst out of the page and the location feels as alive as the tall trees that surround the cabins and main lodge.  My only complaint is, that like an addictive snack, you finish one and then immediately want to reach out for the next. "

Many thanks to Melanie for the lovely review!
Posted by Lee Brazil at 4:00 AM No comments:

Email ThisBlogThis!Share to TwitterShare to FacebookShare to Pinterest
Labels: book review, Cold Snap, In From the Cold, scatteredthoughtsandroguewords

Friends, it is an awesome day here in the countryside, and I have some great news to share. Are you a fan of Pulp Friction?

We've started off the new year with a bang and to celebrate our move to Flagstaff, we're giving away a $25 gift card to All Romance eBooks. To be eligible to win, just click over to Melanie's blog – Scattered Thoughts – and check out our group blog there, leaving us a comment. Remember, prizes are electronic and are awarded electronically, so we need your email address in order to send prizes to winners. Entries without email addresses will be void.

Crawl in Bed With Ethan Stone

Crawling Into Bed With Ethan Stone
And a Good Book

Crawls in bed and fluffs pillows. Important things first, are these sheets silk or cotton?
Neither. I love flannel sheets. They make me feel warm and cozy when I curl up, whether I am alone or not.
Well now, they are quite comfy. Or maybe it's the company? Hm. What are you wearing?
Well, sometimes I sleep in the raw. However, tonight I am wearing Batman boxer briefs. I had a hard time choosing between the Batman, Superman and Green Lantern ones.

Yeah, that is a difficult decision. What are we snacking on in bed while we read tonight?
Tonight I have drawer full of Tootsie Rolls, not the chocolate flavored ones though. I love the fruit flavored Tootsie Rolls, especially the orange ones. I also have some Werner Peppered Gold Medallion jerky. These are my absolute favorite snacks for reading and even more for writing. If you want to help with my writing you can order me more at wernerjerky.com. J

LOL. It's an intriguing combination, I'll say that much. If I open this nightstand drawer, what will I find?
In addition to the flavored Tootsie rolls there are ear buds, cough drops, lube and condoms.

Can I put my cold feet on your calves to warm them up?
No! My ex-wife used to do that and it may have been the reason behind our divorce.

*makes a note not to put feet on Ethan* Okay then, what are we reading?

This scene is with Dylan Hoss and Joey Campbell, cell mates in a maximum security prison. Dylan isn’t sure what to think of his attraction to his friend.

I leaned back so I could see my TV, but not Joey as he cleaned up. Well, I could see him if I leaned forward slightly. Which I did. His back was to me so I had a perfect view of his ass. It was a perfect bubble butt with matching dimples. He dunked a wash cloth into the water he’d filled up in the sink and scrubbed his body.
My cock hardened and peeked out the top of my boxers. He definitely had a nice body; compact but still strong. I’d learned to appreciate the male body though very few turned me on very much. Though I would let just about any guy suck me off, it helped if I found him at least a little bit attractive. I’d get off even if the guy was ugly as a boil in an ass crack, but it helped if he was good looking.
In my mind I was standing next to Joey, our naked bodies bumping occasionally, my hands all over his back and stomach and ass. Then I would push him to his knees, he’d open his mouth and…
I came out of my fantasy when I saw him beginning to turn around. I leaned back so he wouldn’t catch me spying.
I wanted to sneak a peek at his cock, but didn’t want to get caught. I hadn’t gotten any kind of sign from Joey that he’d be up for any gay stuff and wasn’t about to let him know I was open to it unless I was sure he wouldn’t beat my ass.
Trying to get the image of Joey’s ass out of my head took every ounce of strength. I was thankful when he was finally done, though seeing him with just a towel wrapped around his waist didn’t help my libido at all.

Find out more about what Ethan is up to at www.ethanjstone.com
Find him on Face book at https://www.facebook.com/ethan.stone.54

The little green one makes a lot of sense, doesn't he? 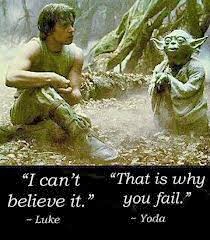 Believing in yourself is the hardest thing, isn't it?

And now, back to work.

I'll be over yonder, pecking away at the key boards.

Email ThisBlogThis!Share to TwitterShare to FacebookShare to Pinterest
Labels: wisdom

Thanks to everyone who participated!
I got some great recs for new books to add to my collection, and found out that a lot of you like some of my favorites, too.

Hate to close the thread, but the time has come to select a winner.

Winner will be notified via email and have 7 days to claim their prize.

Congratulations, and I hope everyone has a great day!

I realized the other day that is had been a while since I did a give away, and I just happen to have spare ARE gift card lying around, so... 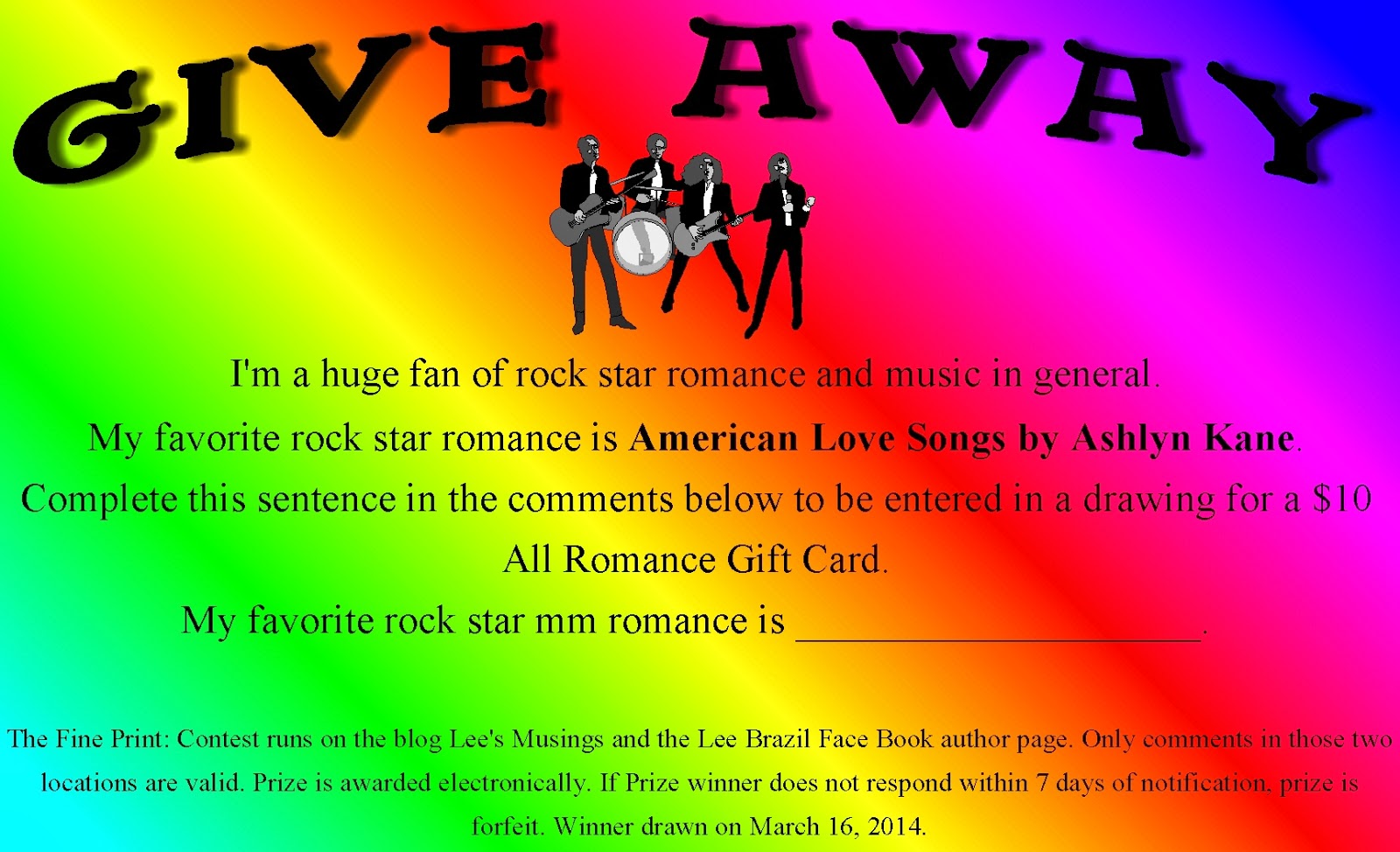 Just leave me a comment below, including your email address, that completes this sentence:

The Fine Print: Contest runs on the blog Lee's Musings and the Lee Brazil Face Book author page. Only comments in those two locations are valid. Feel free to comment in both places, but only two entries per person, please. Prize is awarded electronically. If Prize winner does not respond within 7 days of notification, prize is forfeit. Winner drawn on March 16, 2014.
Posted by Lee Brazil at 7:42 PM 38 comments: