Hello everyone, welcome to my second home, it’s a pleasure to see ya’ll again. *winks* For the newbies out there—hey hey!—

Um…why not? Fine, hello newbies, my name is Havan Fellows. I’m an author currently published in the M/M romance genre and loving every minute of it. Seriously, I couldn’t find anyone who would listen to my babble on a regular basis so why not type it up and send it off to all of you to enjoy…my family and friends thank you for taking the bullet on this one. lmao

No need checking the blog address you’re on…it’s true you came to visit Lee Brazil and got me instead. I’ll take the lucky tally mark on this one. But you see, Lee is kinda to blame for me being here…

Oh naturally. You couldn't blame Will, could you?

I didn’t mean here as in your blog (which btw, Lee hasn’t found any locks that will keep me out yet). No, I mean here, here…in this delectable genre writing the tenacious men I do.

Not only that…but Lee had a big hand in the series I’m about to tell you about, also.

*blushes* I think you're giving me way too much credit on both counts.

So…wanna hear a little tale about how I almost published a book called Geoff’s Fuzzy…or even worse, Fuzzy’s Geoff? Have a seat, enjoy some coffee and goodies, Lee always has the best baked yummies…

If you can get to them before Havan eats them all!

Back away from the cookies…I’ll share the muffins, but these bad boys are mine. Now where was I? Oh yeah…long ago, on a computer far far away (seriously, the computer is now thousands of miles from where I am)…

*whispers* Don’t worry Lee, I won’t mention the handcuffs…or the French cutie that said I could keep you…or the Crown Royal (it was Crown, right?)

It was Johnny Walker Black and so much for keeping secrets!

Where? Are we invited?

Oh yes we are.

Well, this is where Synchronous Seductions came from. First I wrote Harlan’s Ryde…and the feedback from that was so great that people wanted Ritchie’s story, and Emery’s Ritches was written.

Do you see a trend with the titles? That’s important…Lee helped me think them up and I thought the idea of making titles out of the two main characters’ names was so clever.

Until I hit a roadblock.

After Emery’s Ritches…people met Fuzzy and Geoff and wanted their story. Um…Fuzzy’s Geoff? Oh hell no I wasn’t gonna name a book that, but what did that leave me? Um, Geoff’s Fuzzy…

I know, it was bad. What was I supposed to do? I was freaking out, I couldn’t change the format of the title, that would’ve killed me. And in comes Lee! *yay!!*

(because no, his real name isn’t Fuzzy…really?)

But Lee was all like, “You should name him Theodore, so it could be shortened to Teddy and bam(!!) that’s where Fuzzy could’ve originated from…so call it Geoff’s Teddy?”

You think I’m exaggerating…but ask any author, coming up with the perfect title is damn near orgasmic!

I can't really say as that's how I remember it… but sure. Geoff's Teddy is a terrific book J Rom Com at its best.

*hip bumps* so how do you remember it?

And Geoff’s Teddy ended up being the third and final installment in my Synchronous Seductions series, now available all in one great hot bundle.

Blurb:
Seven years ago one of them made a mistake.
That mistake will change six lives forever.
Today. Ryder made a mistake Harlan can't forgive. Will Ryder cross a line no man should cross to obtain a second chance?

Ritchie won't admit he's heartbroken. Emery won't accept less than all of Ritchie's affection. How will arrogant Emery win snarky Ritchie for his own?

Fuzzy is an unsatisfied ladies' man. Geoff's a bear-loving man who satisfies. Problem? Convincing a straight man that satisfaction might be just around the bend.

Warning: This book is chock full of domineering men who don’t like to take no for an answer. If arrogant alpha men make your heart beat faster and other places tingle, this is the book for you.

3“Seven years, Ryde. You can’t just walk in here after seven fucking years and expect everything to be hunky-dory between us. Should we stroll into the kitchen and I’ll whip us up some of those banana pecan pancakes you love and we can laugh about old times over coffee?”The sly smile Ryde gave Harlan made his skin tingle in an oh-so-good way, which ironically enough, wasn’t oh-so-good.“So you remember my favorite breakfast, huh? That’s a start.” Ryde looked around the room again and nodded his head toward the hallway leading to the kitchen. “This way?” And off he went again, like he owned the place.Okay, get through a quick howdy doody with him, and then send him on his way. You can’t go through this again; you can’t rely on something that never was there. It’s not fair of his damn still spectacular ass to come into your home and put you through hell again. Think of all the failed relationships thanks to this guy, think of all the walls you erected in his honor around your heart. Now here he is, six feet of mouthwatering, dunk-him-in-milk-and-eat-him-up goodness, and you are still the geek with a collection of gag gift pocket protectors. Get rid of him now.Unfortunately, the only thing Harlan’s body wanted disappeared into the kitchen. Har had a brain and he had a mouth; the problem was that when they didn’t agree, neither of them worked properly. Apparently there was no getting the boys together today, either.So the rambling started, and before he had his mandatory two cups of coffee. Not good. “If you think for one minute I’m making you pancakes, you have another think coming. I don’t even have any nuts for them, and if I did, I wouldn’t let you have them!” He winced and his eyes widened. Did he just say that? Aloud? To Ryde? Oh hell, he needed Ryde’s inhaler right about now.

About the author:
I annoy, love, respect, scare, seduce, hurt, anger, infatuate, frustrate, flatter, envy, amuse and tolerate everyone. I just do it better in writing thanks to a little thing called…edits.
Okay no, seriously…I'm a simpleminded person who enjoys the escape from real life through a book. I write with the group Story Orgy and hope to continue doing so for a long time. I also am privileged to be with the Pulp Friction writers, creating intermingling books in a world all our own.
I recently took the drastic step of quitting my EDJ (evil day job) and am now living in the gorgeous desert in Arizona making a go at this writing stuff full time…and I can’t see me regretting this decision ever.
Just like every other red-blooded human—I get a little bouncy when I get mail (any kind too…email, comments, private messages…you wanna do it, do it with me *winks*). So feel free to drop me a line—whether it's on my blog, twitter, PInterest, or you track me down on FaceBook or Google +…it's easy to catch someone who wants to be caught.
I specialize in writing boyxboy though I read almost everything...and I fancy myself as slightly funny every once in a while. :) 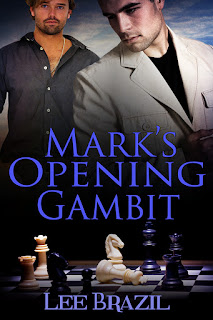 Good Morning! Today I have exciting news. I was able to complete the re-release of another of my Breathless Press titles, Mark's Opening Gambit. This one features gorgeous cover art by BP artist Victoria Miller. It was originally published in 2012 and is one of the first stories I wrote back when I began my career as a writer. There haven't been any significant alterations since the initial edition. This edition is available at Amazon    All Romance     Smashwords  (and its distribution outlets, to include B&N, KOBO, etc) and can be purchased direct from me, if you have a Paypal account, via the Payhip service.