Crawl in Bed With Mick from Blown Hard

Crawling Into Bed With Mick
And a Good Book Blown Hard

Important things first, are these sheets silk or cotton?
I sniffed them earlier and they seem clean, isn't that enough?

*shields eyes* Why don't you…um … cover that thing up? Me? I'm wearing levis and a t-shirt. What are we snacking on in bed while we read tonight?
Beef jerky. Yeah, don't ask, I know it wears out your jaw chewing the shit but there's this guy and...well, it grows on ya. Not to mention the sore jaw reminds me of other fun things to snack on.

I'll er…pass. I brought tequila and it doesn't go well with beef. If I open this nightstand drawer, what will I find?
Look for the bare necessities. We are in the jungle...well woods—hell they look the same when you're running through them all the time, you know what I mean. Oh, you're being serious? Damn lighten up a bit...lube, condoms, toys that take and don't take batteries—depends on the mood, right?

Oh you're bold all right. Most people get a little coy about the contents of their drawers. Do you roll up in the blankets like a burrito, or kick the covers off during the night?
Depends on how much sweating goes on before the snoring starts. Not that I snore—hell I don't even know if I do, I'm asleep when it happens. I might...not like Sugartree and I have ever or will ever get to that point (god I hope we do) but...yeah. Hey, if you wanna stay the night you can tell me in the morning...but just be careful, Sugartree seems to know all the comings and goings around here and is damn good with a bow and arrow...just saying I think he's a little sweet on me whether he likes it or not.

*whispers* Sugartree? *eye crazy man* Can I put my cold feet on your calves to warm them up?
The warmest place on my body is behind my balls and up the crack of my ass...you sure you wanna settle for my calves?

Well, I've never actually been invited to shove my foot up someone's ass before. Threatened to, but not invited to. What are we reading?

Oh, and by the way Lee, I just want to add a side note before we get to the heart of this little chat. I loved your instructions about including all the pertinent information...but I seriously love the fact that you don't think length is an issue. Nice to know you're not a size queen.

*snort* Right. Get on with the reading.

So let's continue shall we? Come on, get comfy...take your clothes off and put your cold feet where you think they'll warm up best...ahhhh, yeah, that's nice. I'm a good host, aren't I?

*eyeroll* Don't be giving these people the wrong idea. I'm still dressed, and my feet are on the ground. It's going to take a little more than a silver tongue to get me compliant. Start reading. 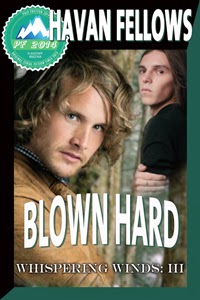 Blown Hard
Blurb:
Today's the day, Rowen and Mick finally have their date. At least that’s Mick's plan, but plans are meant to be broken.

What could possibly go wrong when Rowen and Mick get together to enjoy that dinner Mick's been pushing—shoving, threatening, begging—for? Well, Mick could try to make small talk—that’s never good.

Miscommunication between the two leads to a very different outcome than expected. But that’s nothing compared to what happens once danger blows in from the west. The winds of change hit with all the gentleness of a cyclone. A disastrous dinner date, midnight marauders, enigmas exposed.

When the winds die down, who will be left standing?

Excerpt:
Mick bolted upright in his bed. Something was wrong. What the fuck woke him up?

Even before his bare feet hit the wooden floorboards, Mick knew it wasn't Rowen. The man couldn't even enter his cabin when invited through the front door. He damn sure wasn't going to try and break in after avoiding Mick all night since their encounter yesterday afternoon.

Knowing it wasn't Rowen slowed his roll a little. If not his lover trying to bust into his bedroom, then who the hell was it?

He couldn't see out the window thanks to the heavy drapes he hung immediately after he leased the place for a year. That worked both for him and against him. Sure, the intruders couldn't survey the room and react to Mick's movements, but Mick couldn't look out at them either.

Oh shit, what if it really was a them…as in more than one?

Mick's eyes widened as the realization of the situation slammed into him. Instantly he knew, had no doubt in his mind, who was trying to break into his house.

And he needed to get the hell out before they got in.

He grabbed a pair of faded jeans off the floor and sniffed them. In the process of making sure they didn't stink, he shook his head. Now was not the time to worry about personal hygiene. He slammed his legs in them and carefully zipped the jeans up, his head already whipping around looking for a shirt. His long-sleeved black tee lay strewn next to the bureau's legs, and he dipped down quickly to snatch it up. His eyes landed on his reflection in the mirror on top of the piece of furniture and he froze like a deer in the headlights.

This was it, what he'd feared in the back of his head for the four months he'd been here.

Arturo's goons had found him.

The Pulp Friction 2014 Collection. Four authors. Four Series. Twenty books. One fiery finale. Spend a year with an eclectic group of strangers brought together through circumstances, as they are tested by life, and emerge as more than friends.

The strongest bonds are forged by fire, cooled in air, smoothed by water, grounded in earth.

Although each series can stand alone, we believe reading the books in the order they are released will increase your enjoyment.