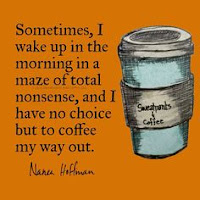 Today's prompt is brought to us courtesy of the fine machinations of the fabulous Em Woods, author of some of my favorite m/m romances and fellow Orgiast.

JULY 11: It Wasn’t His Mother’s Cooking
This Is Not About
Part Four

The scent was amazing, that much was true, but it wasn’t his mother’s cooking. It wasn’t anyone’s mother’s cooking. Dubiously, Drake eyed the multi-colored blobs on his plate, then raised his eyes to meet Mick’s blushing gaze. “What is this?” The blush was pretty… if unusual. Mick was an urbane, sophisticated morning talk show host, after all. He should be beyond blushing.

“It’s a new thing. All the foodies are raving about it.” Fiddling with his spoon, Mick had the grace to look away.

“You’re taste testing or something for a segment aren’t you?” Drake concluded. The contrast in their current atmosphere and the neighborhood bar they’d met at the week before couldn’t be stronger. This place just screamed trendy date night and was chock full of hipster wannabes like the tall guy who’d been at the bar with Sean. Only these hipsters didn’t set Drake’s teeth on edge, and nor did he find himself stifling misery at the reminder of Sean with another man. Maybe he was finally getting over his lost love.

“No… not really… well… maybe. But I really did want to try it.” Mick dragged his spoon through an orange blob, and a citrussy, curry sort of smell wafted up. His lower lip stuck out in a sort of pout, as though he were disappointed in Drake’s reaction.

“It looks like garishly colored baby food.” Drake returned his attention to the blobs on his own appetizer plate, but he was uncomfortably aware of Mick across the table. His friend was dressed with a sophisticated, timeless flair that Drake never could have pulled off. The soft blue pullover matched his eyes, clung to his muscular frame, emphasizing broad shoulders and toned arms. If Drake had attempted to wear such a thing he’d have looked like a fat nerd unsuccessfully aping the styles of a previous generation… or worse yet, like a down on his luck cartoonist who shopped at the goodwill.

On Mick the look was retro-cool and sexy in a very disturbing way. He snuck another glance at Mick under his lashes. And so was that pout… the full lower lip protruded in a  tempting way, and Drake had to scoot his chair back and put some distance between them. He was tempted to do something stupid…

“It smells good.” Mick interrupted that dangerous line of thought and Drake nodded, picking up his own spoon.

“So baby food is the new thing for trend followers, huh?”

“Huh?” Drake glanced up at the unfamiliar term. Thankfully, Mick was still looking at his plate, and he’d stopped pouting, which was really good because that kiss would probably be happening if he hadn’t, and it would really suck to ruin the best friendship he’d ever had by making sexual overtures and turning everything awkward.

“The food people aren’t like the fashion people. They call themselves foodies, not trendy.” Mick glanced up and their eyes locked, and it was Drake’s turn to blush as he couldn't shake the feeling that Mick knew what he’d been thinking, about the kiss and their friendship.

“Foodies? But they’re the same. The follow food trends like they follow clothing trends. Why do they need a special name?” It was a ridiculous question, and they both knew it, but Drake couldn’t think of anything else to say, which was kind of a first. He’d never before felt the urge to fill a silence between them. Normally he and Mick could talk about anything and nothing, or sit in silence without talking at all and still be comfortable.

“Uh… Well… just to distinguish themselves from people who like Chipotle and Applebee's, I guess.”

“What’s wrong with Chipotle and-”

“Nothing. Aren’t you going to try it at least before you diss it?”

He was so hung up on the word foodie that he couldn't think for a minute why someone who supposedly knew him as well as Mick did would think he wanted to start switching burgers and beers for trendy food and call himself a foodie, when he realized that Mick was raising a spoonful of orange pulp to his mouth with a determined expression.

Drake found himself entranced, watching as the silver spoon with it’s vibrant orange blob approached then passed over the succulent glistening lower lip. He couldn’t tear his eyes away as Mick lips pursed around the spoon and closed.

His breath caught as Mick pulled, and the spoon popped, empty from his mouth.

“Uh.” He grunted. A deep ache tightened his solar plexus and he yanked his gaze away, scooping up a greenish blob off his own plate for a distraction. He shoved it in his mouth, and pretended that everything was fine. It tasted like ashes, and stuck to every part of his mouth, like a big spoonful of ash flavored peanut butter. His fingers itched to draw the  image, a leering, tongue stuck letch with big eyes popping out of his head sitting across an intimate table from handsome, oblivious man.

“Okay.” Mick’s chair scraped on the floor as he scooted it backwards. “Let’s go.”

Drake swallowed the green ashes he’d shoved in his mouth and let his spoon fall to the table. “Go?” His voice was thick and awkward in his own ears, barely audible over the sudden hammering of his heart.

“Yeah… Baby food smells great, but the texture…” Mick swiveled his head around, seeking their waiter.

“The texture-” Drake echoed, unable to resist letting his gaze wander over his friend’s figure- the tight pants he’d paired with the pull over were just as retro, and just as… captivating. Though honestly, it was the man in the pants, the lines of thigh and abs, the whole picture that appealed rather than just the fabric that clung.

“I want fried chicken and crisp cole slaw.” Mick nodded firmly, snapped his fingers at a waiter. While the waiter scurried toward them, Mick took out his wallet and dropped a hundred dollar bill on the table.

“Is there something I can help you with, sir?” The obsequious voice stirred Drake from his seat.

“No. Thank you. Cancel our order, please. We’ve been called away.”

“Called away?” Drake muttered aside as he strode beside Mick out of the restaurant, a converted storefront in a strip mall. “Fried chicken was calling you?”

“Hah. I thought it was a better excuse than this food sucks. I need texture.” Mick clicked his car fobbed and a vehicle parked half way down the street purred to life, lights flicking on. “ When I’m old and toothless you can feed me mashed up pulpy stuff.” He shuddered. “What were they thinking? Why is this a thing?”

“Isn't that my line?” Drake protested, automatically swinging around to walk with Mick to his car, even though his own jeep was in the opposite direction, around the corner.

“Why should you get all the good lines?”

Mick opened the passenger side door for him, and Drake slid into the opening, pausing with one knee on the seat. “Because I’m the snarky artist in this pairing and you're the sophisticated trendsetter?”

“Artists are frequently trendsetters,” Mick pointed out as he crossed between his Audi and a Lexus parked in front of it. “I, however, am simply a trend spotter. And that is made even easier by the fact that everyone who thinks they’ve “got something” new sends an email to the station and the flunkies weed through them.”

Drake eyed his friend’s clothes, then his own Levi's and sweater, forcing himself to sneer playfully while his gut roiled. “You look like a trendy kind of guy.”

“Because I have a fabulous person called a wardrobe consultant, who according to my contract with the studio, gets to buy and coordinate all my clothes unless I am at home in the privacy of my own house. Just in case, you know, someone sees me.” Mick’s door opened, and he met Drake’s stare over the top of the car. “Get in. We can hit up a Popeye’s drive thru I know of, and go back to my place, where I can be the real me.”

Drake obeyed, silenced by the implication that he hadn’t really been hanging out with the real Mick.