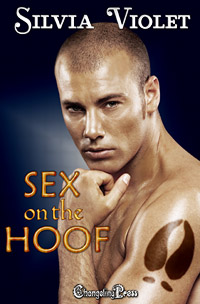 
What do you do to unwind and relax? I bake. Creating cakes, cookies, and other treats is relaxing for me and it’s a way to be creative without the pressure to produce that I have with my writing.
What dreams have been realized as a result of your writing? I’m able to share my stories with others and I’m have a job that I love and can do on my own schedule while staying home with my kids.
If you could leave your readers with one bit of wisdom, what would you want it to be? Never give up on your dreams. "Permanence, perseverance and persistence in spite of all obstacles, discouragements, and impossibilities: It is this, that in all things distinguishes the strong soul from the weak." -Thomas Carlyle
Silvia’s Links
Website and Blog: http://silviaviolet.com
Facebook: http://facebook.com/silvia.violet
Twitter: http://twitter.com/Silvia_Violet
Posted by Lee Brazil at 9:28 AM 6 comments:

Did You Happen to See? 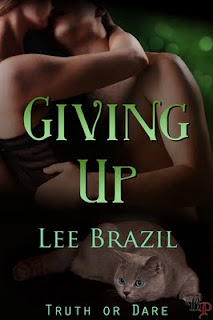 Now Available!
Truth or Dare book 3
Giving Up
This is the story of Brandon Blake, the eldest Blake brother.
It's available from
Breathless Press
ARe
Amazon
BookStrand
1 Place for Romance

Blurb:
Can Dr. Arden Grey teach Brandon Blake that giving up control is worth while, with the right woman?
Brandon Blake has a problem.  His family is fed up with his controlling ways. They don’t need him managing their affairs any more.   doesn’t want to lose his connection with his brothers, but he doesn’t know any other way to live.   He’s been in charge for a long time. Now his brothers are leaving home and making families of their own, and ’s interference has caused some serious rifts. ’s stressful job as CEO of the family production studio and his concerns for his brothers have contributed to the ulcer his doctor recently diagnosed. Therapy is supposed to help  learn how to let go and give up the need to control every thing.   finds the counselor he’s been sent to intriguing, if a bit intimidating, though she has absolutely nothing in common with the women he’s dated in the past.
Dr. Arden Gray knows about control.  A survivor of marriage to a dominant, abusive partner, she’s spent the last twenty years turning her life around.  She’s learned to take control and has made a career of teaching others to do the same.  Brandon Blake is a surprise.  When his doctor sends  to her,  isn’t sure how she can help the man.  But after a few sessions, she sees something intriguing hidden inside Brandon Blake, something that tells her he just might be the man she’s been looking for.  If only she can convince him that giving up control to the right woman will solve all his problems!
Excerpt:
He stood automatically, reaching out to shake her hand in greeting and murmuring polite good mornings.  A slight heat rose in his cheeks and he hoped to hell the blush wasn’t visible.  And why the fuck a simple handshake for the doctor should cause him to blush he didn’t know, but something about her made him feel self-conscious and uncertain in ways he hadn’t felt since he was a wild sixteen year old serving as his beautiful mother’s escort to Hollywood’s wild parties.
He stiffened his spine and forced himself to meet those sharp blue eyes, unwittingly squeezing her hand just a little too tightly.  He watched as the blue eyes flared wide then narrowed, and Dr. Grey gently removed her hand from his.  The flush on his cheeks grew and he felt his stomach churn alarmingly.  He and Trick were about to have more in common than he’d ever thought possible if he couldn’t calm down soon.
Dr. Grey led him into her office and he took the same seat he normally did on the plush leather chair in front of the desk.  Somewhat surprised, he noticed that instead of taking the chair adjacent to him as she usually did Dr. Grey seated herself behind the neat steel and glass desk.  Crossing her hands on the desktop, she met his questioning gaze calmly, and  let out the breath he hadn’t realized he held.  His roiling emotions calmed as he took in her stillness, and even his churning stomach was soothed.  This was different, but not wrong.
Or so he thought until she spoke.
“I’m afraid, , that I can’t keep you on as patient any longer.”
Panic flared.  “What? Why not?”  His stomach heaved and he forced himself to breathe deeply through his nose, swallowing rapidly to prevent the consequences of the sudden lurch.  Nothing of his feelings showed on his face.  He had twenty-three years of practice at making sure of that. He couldn’t have heard correctly.
“Because I can’t help you in a professional capacity.  I’ve given you the tools to manage your problem, you’re an intelligent man and you can resolve your issues from here on your own.”  Her voice remained the same as it always had, soothing and cool, her gaze untroubled and calm.
Damn. How had he come to depend on that calmness in such a few meetings?  How would he deal without the soothing effect her voice had on his nerves and stomach?  Quickly pulling in resources to hide the shocking sense of abandonment he suddenly felt,  grasped the tiny thread of anger and blew it up.
He surged upright and waved his phone in her face.  “Fuck.  I could have been at the office heading off a dozen major crises!  See this?  It’s called a cell phone. I have it with me all the time.  Next time you need to change our plans, use it!”
Posted by Lee Brazil at 5:00 AM 1 comment:

In The Kitchen: Casseroles Are Fun